Spring Cleaning for your PC

Just for quick reference, I’m posting a few photos I’ve snapped with my phone of what your computer should not look like inside.

Why is this on Muddy Geek? All that dust and dirt is causing heat to build up, especially on your processor. Without proper ventilation and heat dispersal, your computer will continue to heat up and become prone to crashing. A simple can of air and some careful vacuuming work will take care of it. And don’t forget, the harder your computer works, the more power you waste. Oh wait, don’t forget to recycle the air can when you’re done too. Gotta be green.

Think Outside the Bottle

END_OF_DOCUMENT_TOKEN_TO_BE_REPLACED

Rene Nunez Suarez is responsible for what should help half the planet’s population.  He has invented and patented an extremely fuel efficient wood burning stove meant for cooking.  Reports state this stove uses 90% less fuel than a traditional stove. 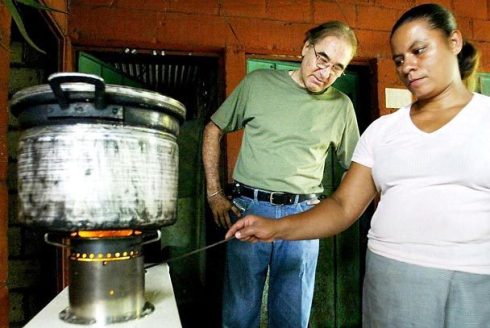 Every site I have looked it has praised Suarez over and over again.  They place his stove on a pedestal.   Its amazing.  Now ask someone in a third world about it and see what the answer is.  Suarez who?  What stove?  Save wood?  I wish.

The interesting story is the background to Suarez.  This man hails from El Salvador, lives with his mother, and drives a ’90 Kia.  His wife left him and took the children.  He has spent his life savings on this stove (some reported US$2.5 million).  In turn, he’s won an award and received a patent.  Whoop dee doo.  Who really cares if no one uses the damn thing?

Suarez had a brilliant idea and has thus far lost out.  He wanted to develop a better way to cook and thus save fuel and time for many people, even those in his own country.  Instead, no one is buying the stove.  The poor folk in third world countries haven’t the money to purchase it and their governments are focused elsewhere.  Environmental groups are traditionally cash strapped or uninterested in actually investing in anything that would help the planet.

So I am imploring my readers, if someone out there is looking for a good thing to invest in, consider his stove.  Consider the vast implications before continuing:  If everyone who needed one had one, we could cut half the planet’s cooking related pollution down by around 90%.  In turn, 90% less fuel means 90% more trees spared.  We still need to revive our forests but sparing them is even better.  The environmental impact would be enormous.

According to Treehugger, this device sells for $325.  Perhaps ramped up production and economies of scale would drive the price down reasonably.   Hell, we can build laptops and sell them to the third world but close to $100 each, why not a stove?

Greener Roofs in the City

Replacing traditional roofs with gardens is something that I have long advocated.  It saves on heating and cooling costs (and therefore reduces pollution) but the plants also help filter the air and improve the building’s aesthetics.  I’ve kindly borrowed a few photos from The Grow Spot.  These buildings and gardens are amazing.  I love it.  These would also go well with the vertical gardens.  Just imagine massive buildings in New York City someday completely covered with plants.  We will have to wonder why we never did it sooner. 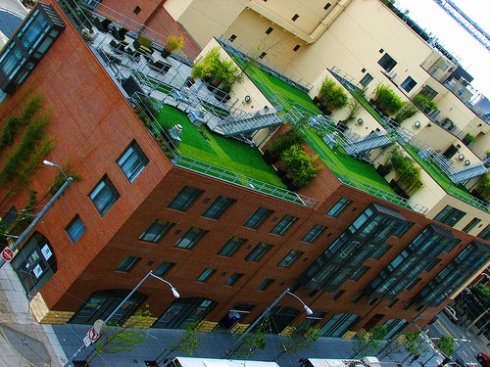 I have some distinctly mixed feelings on moving to ethanol.  Mostly, my regard is to the supply side of the entire issue.  Ethanol is primarily produced from corn in the United States.  We tend to use most of our corn to feed animals which we later eat (pretty inefficient) or we eat it directly.  The problem is that by producing the ethanol from our food source, we’re slowly limiting our food source.  Of course, if we bypassed the animal part of the equation, we would save tremendous amounts of grain.  Plus, the few animals we do use can be fed from leftovers of the ethanol brewing process.  Hmm..  I know there’s quite a bit more to the whole issue.  I see this as a mild supplement but never as a replacement to our fuel dilemma.

This post was ultimately sparked by a representation of all this at Frostfireseeds.com.

Our kitchen cleaning, germ fighting, air sanitizing chemicals may do wonderful things for the appearance of our bathrooms, kitchens, or even the air in our house. Or they are maybe coating our homes with crap we would never dream of drinking or breathing otherwise.

Plus, who wants to spend all kinds of money on cleaners? Poor people unite and get these basic ingredients: water, vinegar, baking soda, and any good strong citrus fruit. According to Mark’s Daily Apple, there’s little (or nothing) that can’t be cleaned in your home with these. Use water and vinegar to clean your counter tops. Rub some baking soda in as an abrasive to loosen dried on gunk. Rent a steam cleaner and use vinegar (or use white wine–oh what a waste!) to clean your carpets. A little bit of citrus (squeeze the lemon directly on) can remove nasty grease.

My advise, go with Mark’s ideas but skip the readers’ comments. The basic ingredients listed are all you really need to get your home quite clean. Plus, keeping these few things on hand is pretty cheap. Heck, I even bake a little with baking soda. And white wine sure is tasty.

Another one from Fast Company, 50 Ways to Green Your Business lends examples of how the big guys did it.

38 Paper or plastic? The unsatisfying answer is neither. Retailers including Ikea and Trader Joe’s sell heavy-duty polypropylene sacks designed to be reused. But how do you get convenience-obsessed American shoppers actually to use them again? Timberland‘s (NYSE:TBL) “Trash Is My Bag” totes (made from recycled plastic bottles) cost $5.50 each or come free with a $100 purchase; to encourage reuse–and more shopping at Timberland–each bag doubles as a 10%-off coupon through the end of 2008.

Definitely take tips for your own business, I’m sure you’ll get some lovely insight. I also learned a few things about companies that I never would have imagined. Plus don’t pass up #50 Hire This Guy. I think I want that job.

Update  Sorry about the coloring on the quote.  I hadn’t noticed that the blockquote was a different color.  CSS is great but not when you can’t change it (for a free anyway) and someone else wrote it.