Spring Cleaning for your PC

Just for quick reference, I’m posting a few photos I’ve snapped with my phone of what your computer should not look like inside.

Why is this on Muddy Geek? All that dust and dirt is causing heat to build up, especially on your processor. Without proper ventilation and heat dispersal, your computer will continue to heat up and become prone to crashing. A simple can of air and some careful vacuuming work will take care of it. And don’t forget, the harder your computer works, the more power you waste. Oh wait, don’t forget to recycle the air can when you’re done too. Gotta be green.

So criticizing the famous and now delayed Everex Cloudbook has been an unpopular decision. Heh, I guess it was just unpopular to go public with my opinion and making it even a little on Digg didn’t help. So in all fairness I think I should review the Cloudbook again in light of what everyone has mentioned. Before reading any further though, my kind readers need to understand that the point of MuddyGeek is to examine technology, open source, and environmentalism individually as well as how they may interact. For example, I may look at why a new solar powered building is very interesting from a technical perspective such as how researchers have made it thinner or more efficient. Or else I can look at the same building for its aesthetics and very noticeable stance on the environment. Not everything here is about cool technology. Something can be awesome from a geek perspective but environmentally detrimental nonetheless.

All that said, clarified, and finished… I would like to cover the Cloudbook completely like no one else has yet…

END_OF_DOCUMENT_TOKEN_TO_BE_REPLACED

Why the Cloudbook Doesn’t Matter

The Everex Cloudbook is $400 ultra portable-ultra mobile notebook running gOS Linux (gOS for Good OS but g can also be for green as these utilize low voltage processors and g for Google for their bundled apps). I am going to examine why the Cloudbook simply doesn’t matter and why it is a mistake for Everex to pursue.

This is Everex’s attack on the a couple markets. First, its going after the ultra portable niche market where the Asus Eee resides. These devices more commonly seen as the abbreviation UMPC are low appeal for most consumers. Why they are small and light, they also lack the functionality that a full size slightly more expensive notebook offers. The 7 inch screen is certainly going to sip power compared to the behemoth 17 inch notebooks many consumers flock after now. A 7 inch screen is also going to be harder on the eyes for many older folks thus losing its appeal to one group. My other big problem here is that the CPU and RAM combination. The processor is a nice Via C7-M which is about as easy on the battery as it’ll come for 1.2 GHz. Its still underpowered for most Linux distros today and gOS won’t be an exception for long. Maybe this would be okay with more RAM but the unit comes with 512 MB and it can only be upgraded to 1 GB. A basic Sempron or Celeron would have afforded better performance even if cutting down battery life slightly. Heck, throw in a ultra low voltage Core 2 Duo and see it fly.

END_OF_DOCUMENT_TOKEN_TO_BE_REPLACED

Looking for a new system? Time to upgrade? Skip the Microsoft Tax and buy Linux preloaded. Often the most difficult part of buying a new computer is finding reputable companies that sell Linux based systems. Even then, some still buy Windows systems, wipe them, and load Linux (thereby still buying a Windows system and paying Microsoft).

Why does it matter? For starters, if you don’t want to use Windows then don’t you shouldn’t have to pay for it let alone buy it. Very very few computer manufacturers are going to refund you the famed Microsoft Tax now. Many have EULAs that state you are buying the computer and preloaded software together. They go on to say that if you refuse the software to return it the whole unit for a full refund and that the software is not specifically eligible for a refund.

Another good reason for buying Linux preloaded? It tells the computer companies that people want Linux. Big names Dell and Lenovo started offering Linux options only after enough people petitioned. Now it entirely lies upon enough people buying these computers for the manufacturers to keep offering them and eventually pushing/advertising them.

I think it is entirely critical for Linux to get it preloaded and out there for consumers. I don’t believe in the Year of Linux or any such nonsense. I do believe there can be a year when Linux dies and I don’t want to see that. I believe the future of Linux relies on taking over the desktop now with all the bad press that Vista has.

So finally, I present the preloaded Linux options. This isn’t a review per se, only a listing of the computer manufacturers selling Linux preloaded.

END_OF_DOCUMENT_TOKEN_TO_BE_REPLACED

This cool little tool lets you transform your typical Secure Digital memory card into a solid state drive for your computer.  By plugging this in an IDE (or what they call PATA now — Parallel ATA) slot, you can load your preferred OS on the card.  The best advantage is that solid state drives are quite fast and that they can speed up your whole system.  Of course, I could keep a regular hard disk drive around for my regular storage but why dare run your OS of one now?

There are some other inherint advantages.  These are going to be quieter and use much less energy.  Plus SD cards hold up really well to abuse.  To top it all off, you can buy one for only $25.  The next idea?  Do this with SATA II.  Plus buy an Extreme SD card with the fastest read/write speeds you can find.  Benchmark the difference.

This person made a nice case for their um…computer? Hmm…its definitely a big sign of ultimate geekiness when one builds a computer case resembling a woman. But its still quiet well done and worth a big mention. See it all at Popuplace. 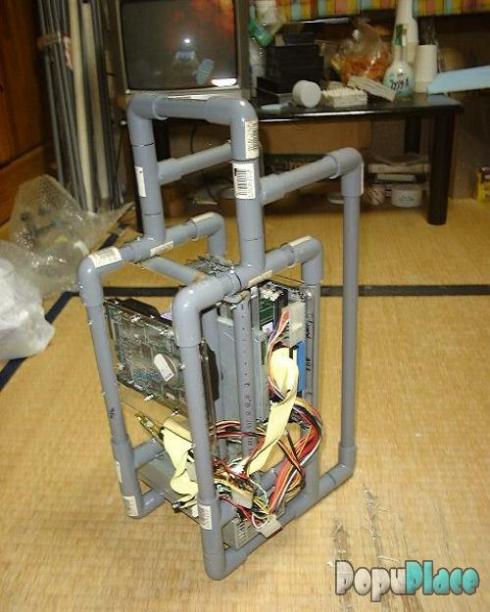 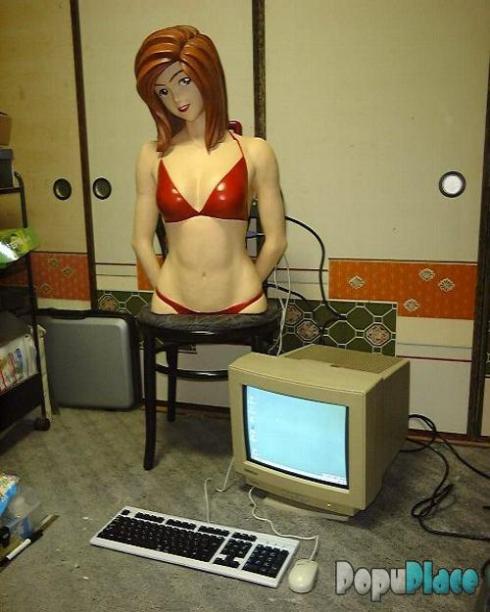 While this is extremely un-green and probably uses as much electricity in a day as I do in an entire month, the geek in me still craves for this kind of crazy setup. Wow. Please, someone, help? Maybe just a couple of monitors? I don’t need all 24, maybe 4, 6, even 8?

Muddy Geek
Create a free website or blog at WordPress.com.